Since its very first meeting at Patrick Byrnes Tavern on Front Street below Walnut Street, The Society has flourished over the centuries to include prominent Philadelphians–Benjamin Franklin, His Excellency Governor Richard Penn, Robert Morris, Bishop William White, as well as other area residents–who have all shared a love of their local community and their English heritage.

Today, almost 250 years later, we remain a vibrant, 501(c)(3) charitable organization dedicated to fostering community and advancing English-focused educational opportunities for those living in the Philadelphia region. We invite you to learn more about our Society and to join us as a member of this historic organization!

The Royal Society of St. George

The Society is an affiliate member of the Royal Society of St George, the Premier Patriotic Society of England, founded in 1894 whose Royal Patron is Queen Elizabeth II. The Royal Society has branches in England and throughout the world. Society members traveling abroad are welcome to attend the events of Royal Society branches.

St. George the Dragon Slayer is the patron saint of England (as well as many other countries). We celebrate his feast day on April 23rd, the date of his death in the year 303. A Roman soldier of Greek origin, St. George was sentenced to death for refusing to recant his Christian faith. A martyr who became one of the most revered saints in Christianity, St. George’s legend grew to include the slaying of a dragon to save a town of Christian converts. His emblem is a red cross on white–also known as the St George’s Cross. Fittingly, The Society’s annual St George’s Day Gala Celebration, held each year in April, is an event not to be missed. 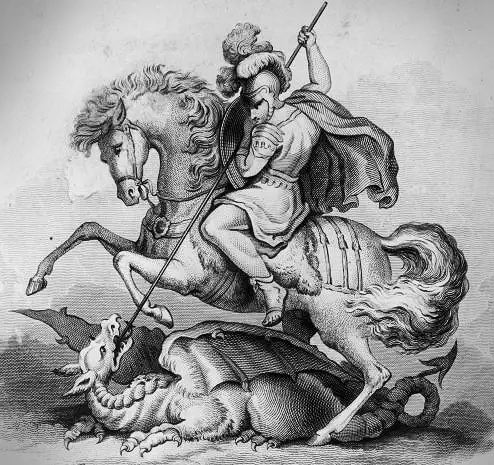